The standard picture of cosmology, which describes the evolution of our Universe from the Big Bang to the present day, has received extraordinary support from astronomical observations during the last decade. Still, one of the most intriguing questions of modern cosmology is the nature of the elusive Dark Matter (DM), which is known to provide 83% of the matter in our universe. This unknown form of matter does not interact with ordinary matter other than gravitationally, thus rendering DM completely “dark”. The properties of DM do not fit to any of the known particles in the Standard Model (SM) and it has never been produced in accelerator experiments on Earth.

DM is believed to be a thermal relic from the Big Bang, where it was produced in thermal equilibrium with all other particles. Since then the number of DM particles in our Universe decreased due to pair annihilation, i.e. two DM particles destroy each other in a collision and produce stable SM particles, such as electrons and positrons, protons and antiprotons, neutrinos and photons, all of which can carry energies in the GeV and TeV range. From these the photons can be observed at the position of the Earth with the help of gamma ray telescopes, such as the current Large Area Telescope (LAT) aboard NASA's Fermi satellite or the future AMS02 detector aboard the ISS.

In addition to high energy photons, which travel along straight lines and provide us with direct information about the DM annihilation rate in a certain direction of the sky, the charged annihilation products provide us with indirect information about their origin and their astrophysical environment. These electrons, positrons, protons and antiprotons mix with the flux of cosmic rays (CR) which travel through our Galaxy. The latter are produced in the remnants of old supernovae or pulsar nebulae. After injection into the interstellar material they undergo the same interactions with their astrophysical environment as the charged annihilation products from DM. This way secondary photons are produced via bremsstrahlung and neutral pion production in the interstellar material, Inverse Compton scattering off starlight, dust emission and the cosmic microwave background and synchrotron radiation in the Galactic magnetic field. A certain fraction of both, CRs from supernovae and CRs from DM annihilation, reaches the Solar system and can be detected with balloon-borne experiments in the Earth's upper atmosphere for the lowest energies, detectors aboard satellites for intermediate energies and ground based air shower arrays for the highest energies.

In the framework of DM searches the intermediate energy range, accessible to us via satellite experiments, is of greatest interest. Here the local CR flux is composed of astrophysical CRs and CRs from DM annihilation, both of which underwent the same transport processes in the interstellar environment. In order to disentangle the contributions from DM annihilation and astrophysical sources in the locally measured CR and gamma ray flux, it is necessary to model the astrophysical processes in the interstellar environment, which govern the transport and the interactions of both these species on their way to Earth. 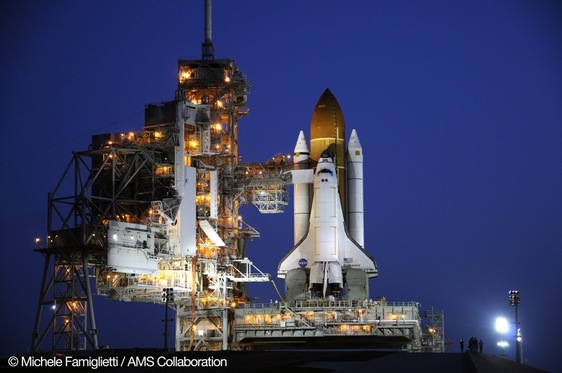 One large scale experiment, the Alpha Magnetic Spectrometer 02 (AMS02), will be mounted on the International Space Station (ISS) in May 2011. The AMS02 experiment will exceed previous experiments in acceptance and background rejection by far. In addition AMS02 is the first experiment which will simultaneously serve as a Cosmic Ray detector and a gamma ray telescope, thus allowing us to tightly cross correlate proton, electron and photon fluxes within a CR transport model.

This Young Investigator Group addresses the question of the nature of dark matter in a joined theoretical and experimental approach. On the theory side we focuss on the detailed modeling of the astrophysical transport processes which govern the transport of DM annihilation products in our Galaxy. These efforts are embedded and complemented by

focussing on the proton/electron rejection with the help of the AMS02 transition radiation detector and the electromagnetic calorimenter.

[5] DMMW-A tool for multi-wavelength dark matter searches – I. Gebauer, S. Profumo (to be submitted to JCAP)

last change: 2020-04-02 KIT – The Research University in the Helmholtz Association